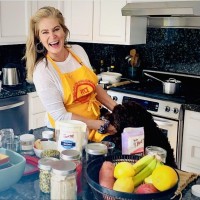 About the Author Laura Plumb

"First I fell in love with Yoga, then a wild and wise Yogi, then Jyotish, Ayurveda, India, an ashram and a certain saintly Swami. Now I live in a place called ‘awe,’ for who knew love could be so deep, or that the world could rise up so high with vigor, grace and heart. I teach in order to sustain." —Laura Plumb

Laura Plumb promotes sacred, sumptuous living through the Vedic sciences of Ayurveda, Jyotish and Yoga Sadhana. She has studied with some of the great masters of our time, practicing and sharing what she has learned from time tested, heart-centered wisdom schools of the world. Her blog 'Food A Love Story' is an inspirational resource for Ayurvedic nourishment and delight.
http://lauraplumb.com/
Twitter Facebook