Originating in India, Ayurveda is perhaps the oldest system of Holistic Medicine dating back to 6000 B.C. Ayurvedic medical textbooks were written Sanskrit, one of the oldest recorded languages of the world. Ayurveda literally means “science (ved) of life (ayur)”.

According to the texts, Ayurveda in veterinary medicine has traditionally focused on animal welfare, treatment therapies, management and surgery. In the Rigvata (2000 to 4000 BC) physicians described treatments for both animals and humans. Salihotra was the first to be credited as an animal healer when he wrote Ayurveda Materia Medica in Veterinary Medicine and Mrig (animal) and Hasti (elephant) Ayurveda. The first recorded Veterinary Hospital opened by King Oshika in 1463 BC, used Ayurvedic Botanicals.

Ayurvedic herbs and modalities have been in use for thousands of years and have a proven track record of safety and efficacy. The majority of Ayurvedic herbs are well researched and backed by clinical trials. Combination of herbal products stabilize the energetics of other ingredients, leading to a balanced product. The combination herbs can easily be prescribed to treat many problems, even before the clinician studies the basic history, philosophies and principles of Ayurveda to allow deeper healing.

Body typing in Ayurvedic Medicine is based on the five elements theory and is expressed as the Tridosha. The Tridosha are the three humors, or metabolic forces that make up the mind and body. They’re called Vata, Pitta and Kapha. At the time of conception, permutations of Vata, Pitta and Kapha determine the constitution of the new individual controlling all biological, psychological and physio-pathalogical functions of the body (including ariabolism (Kapha), catabolism (Vata), and metabolism (Pitta)), as well as the mind and consciousness. Each one has subtle properties and together they determine personality traits and physiological structure. Maintaining balance within the dosha is necessary for optimal health.

Characteristics Of Vata In Animals

Vata is considered the leader of the three Ayurvedic principles in the body. Vata governs all movement in the mind and body.

Characteristics Of Pitta In Animals

Pitta is a force created by the dynamic interplay of water and fire. These forces represent transformation.

Characteristics Of Kapha In Animals

Kapha is the combination of water and earth. It provides both structure and lubrication. One can visualize Kapha as the sitting force that keeps the water and earth from separating.

Ashwagandha, or Indian ginseng is indicated as a daily rasayana or anti- aging therapy. It is one of the most highly regarded and widely used Ayurvedic herbs, believed to increase energy and overall health, as well as longevity. Ashwagandha, literally means to “impart the strength of a horse”. The key constituents of Ashwagandha are called withanaloids and play an important role in the herb’s ability to promote physical and mental health. Ashwagandha can be used on a long-term basis without the risk of side effects. Benefits include:

I have successfully used Ashwagandha liquid for chronic renal failure in cats and for inappropriate urination (behavioral) in cats. I have also used it for stress related issues such as travel, addition of a new pet, family member, etc. 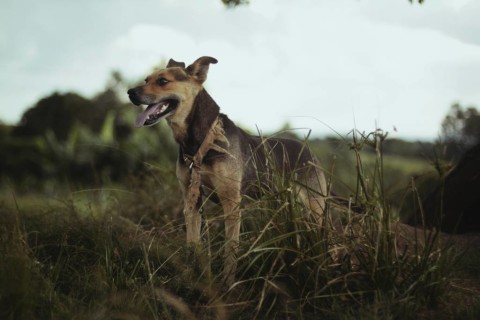 A ten-year-old german shepherd named Cassie came to my clinic with severe non-regenerative anemia and myelofibrosis. A biopsy revealed hemosiderosis of the bone marrow. Her condition was considered irreversible by veterinary pathologists. Initial blood work showed the PCV at 12.7% (normal 37 to 55). I prescribed Ashwagandha and Boswellia and the blood count gradually increased from 13.1 to 28.1 at which point the improvement stopped. I quadrupled the dosage of the herbs and saw a remarkable response. Cassie’s blood count increased to 39.8% and has remained at 40.3% for the last two years. Originally this dog has been given very little time to live, but with Ayurvedic supplementation her diseased condition was reversed and Cassie was able to enjoy a high quality of life.

This is one of Ayurvedic medicine’s most potent anti-inflammatory herbs. Boswellia is a promising alternative to conventional NSAIDS with the added advantage of sparing the GI lining. It is therefore useful for inflammatory disorders of the intestines, respiratory tract and skin. Boswellia significantly reduces the production of prostaglandins E2, cycloonxgenase-2 and prevents collagen degradation. The most common use is for osteoarthritis, degenerative disc disease and any inflammatory condition of bones, joints and spine. It is also neuroprotective, analgesic and antifungal.

Turmeric is a perennial herb-rhizome commonly used as a cooking spice. Curcumin is the yellow pigment extracted from turmeric. In Ayurvedic tradition turmeric is a general tonic and blood pacifier. A potent anti-inflammatory agent with analgesic properties, curcumin’s essential oil has shown anti-microbial activity against gram positive and gram negative in vitro studies. Curcumin also possesses anti-asthmatic, antioxidant, hepatoprotective and anti-cancer activity. It is also known to have strong anti-ulcer activity due to its strong immune modulation and immune-stimulant properties, thus making it very effective in IBD cases. Curcumin maintains healthy cyclooxygenase-2 (Ld4) activity while supporting prostaglandins, leukocytes and thromboxane metabolism. Like Boswellia, it has neuroprotective properties so our local neurologists use it for spinal injury and inflammation.

Neem has attracted worldwide attention in the medical community due to its wide range of medicinal, insecticidal and fungicidal properties. Practically all parts of the Neem tree are used in Ayurvedic Medicine. Fresh new leaves are used in concoctions for a variety of skin and other inflammatory disorders. Oil extracts from the leaves and seeds are potent antiseptics and insect repellants. Neem has immune-modalities and anti-inflammatory, antifungal, antibacterial and antiviral properties. It is also considered anti-hyperglycemic. Since it is considered a valuable insecticidal, it can be used for external parasites. All parts of the Neem plant – leaves, bark and oil based products – are used for this purpose.

Trifla is a combination of three herbs, Terminalia cherbula (Haritaki), Terminalia belerica (Bahera) and Emblica officinalis (Amla). This long revered herbal blend has been used for thousands of years and is referred to in almost every Ayurvedic textbook. This mixture is considered adaptogenic. It has synergestic action as well as digestive properties. It is also considered a powerful antioxidant. Haritaki is rich in tannins, amino acids succinic acid and beta-sitosterol. Baherta supports the immune system and is one of the best available sources of Vitamin C. Trifla has bowel regulating and mild laxative properties and aids both digestion and elimination. It is used for respiratory and allergic illnesses as well as heavy metal toxicity. It is anti-ulcer, anti-cancer, anti-mutogenic and promotes healthy eyes. 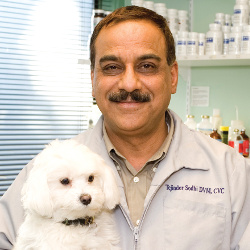 After working as an associate veterinarian at two different animal hospitals, Dr. Sodhi opened his own clinic in Lynnwood, Washington, The Animal Wellness Center with clients coming to him from throughout Washington state and even from the East coast of the United States and Canada. In 1996, Dr. Sodhi opened his second location in Bellevue, WA where he offers a full aquatic center for rehabilitation of animals and to meet the demand of growing holistically minded clients in the greater Seattle area as well as on the Eastside.