Dr. Kulreet Chaudhary and The Prime 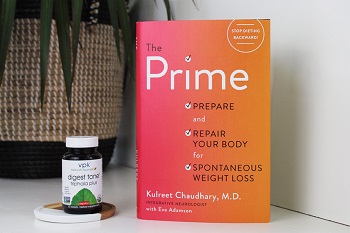 “I still can’t imagine that I wrote a book about weight loss,” she said in a recent interview. 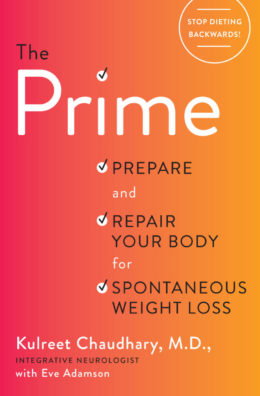 And yet, men and women everywhere are getting to know Dr. Chaudhary and learning Ayurvedic principles through her first book, The Prime: Prepare and Repair Your Body for Spontaneous Weight Loss, which was published in January.

When Dr. Chaudhary enrolled in medical school nearly twenty years ago, neither weight loss nor Ayurveda hit her radar. The central nervous system was covering her whole screen. After medical school and her final hospital rotation, she was ready to dedicate her entire life to unraveling the mysteries of the nervous system.

“It’s like when you meet your true love,” she said. “With neurology, I thought this is it. It was so complex that I knew I could study this for the rest of my life and never get bored.”

Dr. Kulreet Chaudhary graduated from medical school, completed her neurology residency and opened her own practice. She worked with patients who had been diagnosed with multiple sclerosis, Parkinson’s disease, dementia and other neurological conditions. And she treated them with pharmaceuticals as she’d been trained.

Until she became a patient herself.

When severe migraines started interfering with her life, Dr. Chaudhary took a medication she’d prescribed to patients. And she hated it.

“The side effects were so bad that I could barely tolerate them,” she wrote in The Prime. “This was what I’d been telling my patients to take? It was the first time I realized how miserable I’d been making them feel.”

Dr. Chaudhary told her mother what was happening, and her mother suggested that she try seeing an Ayurvedic doctor. Reluctantly, Dr. Chaudhary saw her mom’s Ayurvedic practitioner and followed his prescription, which was to take a few simple herbs and adjust her diet.

Within three months, the migraines were gone.

After that, Dr. Chaudhary started referring her patients to Ayurvedic practitioners. When she saw the impact it had on them, she decided to train in Ayurveda herself and integrate its knowledge of balance and health into her practice. Her peers discouraged her and told her that she’d be throwing away her career. But she stayed the course. And her patients were grateful.

“I discovered that many of my patients were already trying alternative treatments and strategies on their own and were afraid to tell me,” she wrote. “They were relieved to have a physician who was truly willing to partner with them in their health efforts.”

Incorporating both Eastern and Western medicine into her practice, Dr. Chaudhary continued to treat her patients using both sets of tools for years. While she focused on fewer relapses in her MS patients or a reduction in medications for her Parkinson’s patients, the patients themselves noted something else.

“People were losing weight for seven or eight years before I noticed it,” Dr. Chaudhary said.

Weight loss may not have been her primary goal for her patients, but it’s an important issue for many people. In the U.S., more than two in three adults are considered to be overweight or obese. And more than one in three children are. Obesity alone is linked to many health issues.

In The Prime, Dr. Chaudhary never mentions calories or grams of fat. Yet she addresses the underlying factors that cause obesity in so many.

“Western medicine is reactionary in nature,” said Alan Marks, CEO of vpk® by Maharishi Ayurveda. “That is, we wait for symptoms and then treat them. Ayurveda, on the other hand, recognizes the underlying imbalances that will later manifest as disease and addresses these. If balance is regained, the symptoms we know as disease never manifest, or if present, tend to spontaneously fall away. In this case, her readers are finding, as did her patients, that weight loss starts to spontaneously happen.”

Instead of talking about common strategies to shed pounds, Dr. Chaudhary delves deep into the brain-gut connection. She explains that the gut isn’t only a place where food is metabolized, but also includes a network of neurons, neurotransmitters and nerve cells that line the digestive tract like one long, skinny brain – our second brain, according to Ayurveda. She breaks down technical medical terms, and explains the two-way superhighway that runs from our gut to our brain, and vice versa.

“The gut was an extension of the nervous system, so it earned my love as well,” Dr. Chaudhary said.

And more than that, she liked how knowledge of this gut-brain connection could empower patients.

“In our minds, the neurological system is fixed,” Dr. Kulreet Chaudhary said. “Once we say it’s in the brain, we freeze and say it’s untreatable.”

But the same isn’t true of digestive issues.

“Once we say it’s in the gut, it’s treatable,” Dr. Chaudhary said.

“Understanding the reciprocal relationship between the gut and the brain is one of the keys to real, lasting change and good health,” Mr. Marks said. “If we are telling ourselves, ‘just eat less, just simply stop eating so much, just change your behavior,’ but the food that we eat and the state of our digestion and health are sending contrary signals to the brain, actually telling us we need more food, a vicious cycle may start that does not yield results and is emotionally demoralizing.”

“The methods laid out in The Prime are truly a compassionate approach to good health and weight loss,” Mr. Marks added. “Taking the focus off the symptom, or symptoms, of imbalance and putting the focus on good health, with the result being spontaneous weight loss, removes an almost insurmountable burden for many.”

How? The Prime lays out a four-stage plan to treat the gut. It calls for adding herbs, broth, and teas; dry brushing; and meditating. As the body detoxes, our digestion becomes strong and efficient, and we adapt to this new routine with the results that we experience: fewer cravings for junk food, an increased appetite for nutritious dishes, and a dropping of pounds.

Reviewers on Amazon rave that they’ve lost weight and gained energy. And physicians have told Dr. Chaudhary that they’re giving the book to their patients.

“I was so surprised by the positive response from the medical community,” Dr. Chaudhary said. “I’m so accustomed to being treated as an outcast for doing this.”

It appears that the layout of the book, the ease of the program, its high success rate and changing times have opened the door for many physicians to consider it as an alternative to traditional Western medical views.

Judging by the response, patients and doctors alike have been waiting for an Ayurvedic primer just like The Prime.