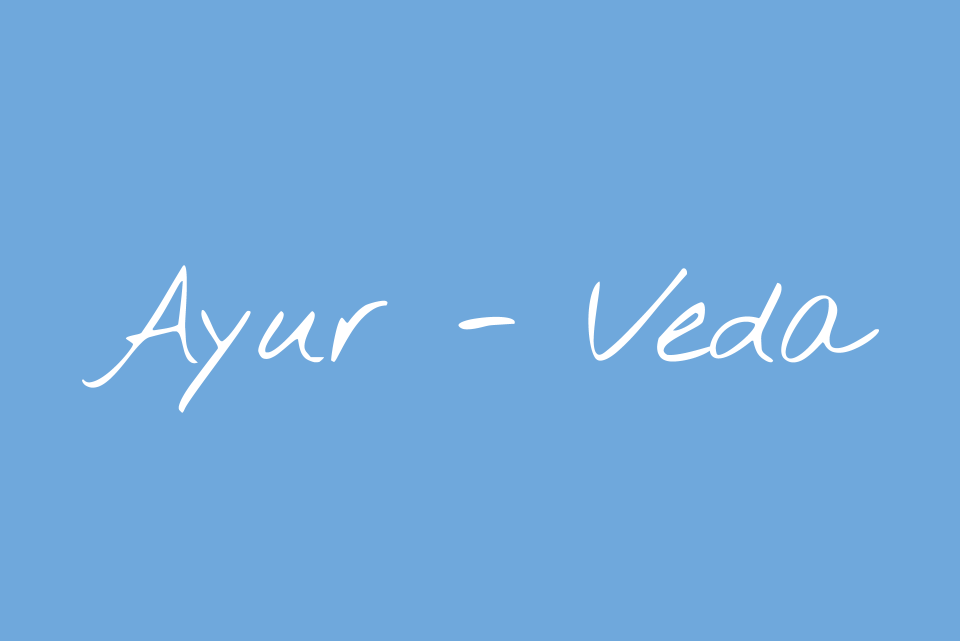 The word Ayurveda is one of the most mis-pronounced Sanskrit words I have heard. Usually I hear it said as: “Are-your-veda.” To understand it’s pronunciation and meaning better, let’s take a look at the two parts of the word. Ayurveda is a Sanskrit word made of āyuh, which means life/longevity and veda, which means science and or knowledge. Thus, the word āyuh + veda means the science of life or expansion.

In Sanskrit, there is a concept known as sandhi, which tells us that when certain sounds come in contact with each other they must shift to blend in a harmonious way. When the ‘h’ in āyuh meets with the ‘v’ in veda, the ‘h’ shifts to become an ‘r’ and changes the first part āyuh to āyur. The soft letter ‘r’ then invites the soft letter ‘v’ in veda to connect and now the word is more easily pronounced. Properly said the word is āyurveda. I find when showing students how to pronounce the word it is helpful to work out the first part, āyur (rather than the common mispronunciation ‘aryur’). Try saying it with me now. Guidelines: Accent the first long ā and pronounce the ‘r’ after the ‘u’ then accent the ‘e’: Āyur – Veda, Āyurveda. Great!

It is said that āyurveda developed during the vedik period. However, there are four vedas, the oldest books of Sanskrit, which are called: Rk, Sama, Yajur and Atharva. People often question: What is the fifth veda? But there is no actual fifth veda. The statement is a kind of metaphor. It means that a particular text that is mentioned, if it’s called the fifth veda, is so important that it might as well be called the fifth veda. People can refer to Ayurveda as the fifth veda. Although to be clear, it is not. However, the fact that it’s referenced as such highlights its importance and significance within the context of Yoga and Sanskrit culture overall.

How Ayurveda is Relevant for the Yogi-in-training

For the modern yogi-in-training, Ayurveda is important in that it offers a system of natural healing practices which include herbs and lifestyle changes that guide the yogi-in-training to understand him/her self, while simultaneously expanding the life force. The two come together to become self/Self knowledge. And self/Self knowledge then spans out to the world around the practitioner, to his/her relationships in daily life. For example, when you experience healing through āyurveda, your body and mind begin to relax and soften. In this easeful space, you are able to listen to your inner spiritual dialog. Through the healing that āyurvedic practices give you access to, you have a greater capacity to listen to your self and others. This newfound capacity of feeling calm and connected is the healing that forms the foundation of āyurveda.

We all need gentle reminders … This beautifully embossed Surya Jewels ring in Sterling Silver or 14Kt Gold offers a perfect reminder throughout your day to engage yogic practice.